White tailed deer are commonly hunted as game animals all over the United States. They are the most distributed large mammals of North America and it is most probably the reason why hunters are able to hunt them with a few restrictions. These animals can easily adapt to their environment and so they can effortlessly live off the land by feeding on grass and bushes. Naturally, the white tailed deer are able to strive in all US states except for Alaska and some desert parts of Nevada and New Mexico.

Facts And Secrets Of The White Tailed Deer Although deer is classified as a large mammal, the white tailed deer specifically are the smallest of all deer breeds in the US. Nonetheless, these deer can stand up to about 1.2 meters from hoof to shoulder when fully grown. These animals are not to be trifled with by amateurs so one should really study them first before going out to hunt them.

Deer naturally seek the protection of trees and vegetation to safeguard themselves from all sorts of natural predators such as bears, mountain lions, jaguars, wolves, and coyotes. They have white spots over their brown fur that change in color depending on the seasons. They have reddish brown fur during summer and somewhat grayish during winter to help them blend in with the snow and keep them from being seen easily. During daytime, deer may naturally stray into open fields looking for food but at night, they prefer to keep comfort in the forest and most especially during winter. Despite their natural habitat being deep in the woods, deer have actually been spotted at farms where they feed off the food planted by farmers and so they get shot down as pests. 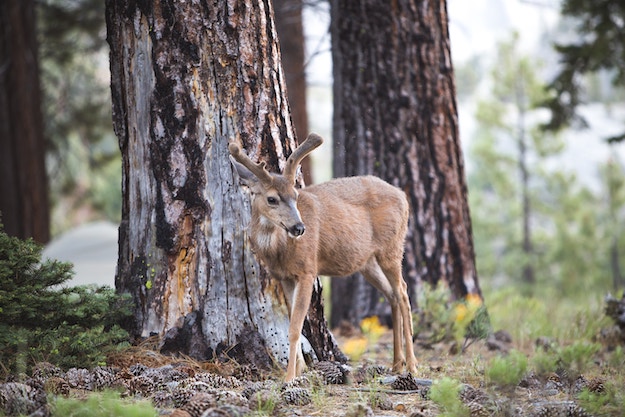 During the mating season, bucks fight over territory with their large antlers in a sparring match which is often a sign of strength to attract female deer. When a buck and a doe successfully mate, the female deer usually gestates for 7 months and gives birth to their baby deer called fawns. A birthing doe can actually have two to three fawns at once!

The diet of the white tailed deer consists of grass, leaves, twigs, and even fungi! When the white tailed deer sense danger, they are known to raise their tails up allowing the white fur to be shown. This is their way of signalling other deer to be vigilant because they are sensing suspicious activity in the area. This motion of waving their tails is called “flagging” by hunters and other outdoorsmen. Once the mothers of the fawn notice this event, they rally their young to their side and hide themselves in the woods.

As a hunter, one should easily be able to know once the deer senses danger because you see them flagging. If the deer doesn’t do this, chances are they haven’t noticed you at all. Oddly enough, parent deer do not behave like other animals do. From time to time, they leave their young back in their safe hideout for hours to feed or to gather food. Luckily enough for the fawn, they have very little scent and can hardly be spotted by predators due to the white spots on their backs. This allows the fawn to thrive even without the protection of their mother.

White tailed deer are unsurprisingly mobile. They have large hind leg muscles that allow them to leap as high as 10 feet. These animals can run very fast at 48 kilometers per hour and leap horizontally up to 9 meters! Trying to shoot a running white tail is very likely to be a success. Ultimately, the white tailed deer is a challenge to hunt without the use of powerful rifles or strong bows. But faced with a Remington 770 and a lot of practice, it should be easy to haul in a hundred kilogram deer. Knowing they stand helpless against rifles and bows, hunters should be very wise to regulate hunting these marvelous creatures so as not to hunt them to extinction. They may be a lot of them in the wild now, but hunting can easily kill off their species.

Related Topics:hunting tips
Up Next

[Watch This] Go Bow Hunting With A Homemade Longbow