Safe hunting precautions should not be taken lightly and should most definitely be followed. Adhering to the standards of safety hunting is of utmost importance and could actually be your ticket to a great and successful hunting experience. Wearing the hunters orange is a safety law in some hunting areas and there are a multitude of reasons why you should never neglect this law.

Wearing the blaze orange or hunters orange is not necessarily a must in some territories, but it definitely helps to wear equipment that has bright orange in it. Its purpose is for your safety as a hunter and in addition, having clothing that has a bright hue can help rescuers find you easily in case you get lost. 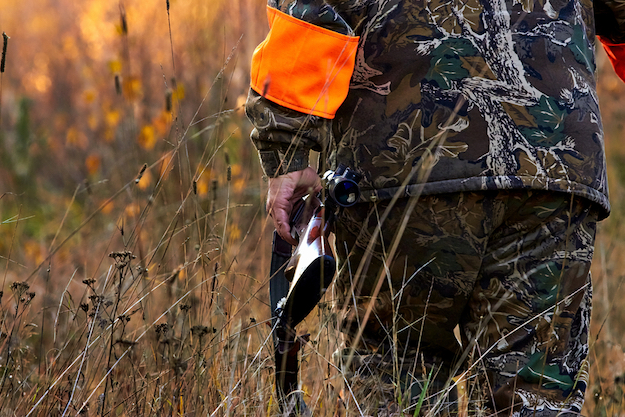 In some places, the hunters orange isn’t required during bow hunting season. During the hunting rifle season however, some laws require to wear gear that has at least 20 inches of hunters orange in it. The main point of it is to avoid getting shot at by other hunters or to prevent them from shooting at your direction altogether. Some beginners wouldn’t actually get the logic of wearing a bright orange vest and camo clothes underneath it. Well, the logic is simple. Deer can’t exactly see things like we humans do. They are only able to see colors with smaller wavelengths like dark green, dark blue and even ultraviolet light! And more importantly, deer may be color blind but they are able to differentiate the environment from humans through shapes so the more blaze orange there is on your clothes, the more noticeable you are likely to become for the deer.

Choosing a blaze orange apparel that has a pattern or opting to wear a cap to match your vest depends on the vegetation where you are going to hunt. Wearing a blaze orange with a camo pattern on it might not prove to be useful when in areas with dense vegetation. The deeper you are in the woods, the harder it is to see you even if you’re wearing a full blaze orange jacket.

As you can see in the picture, at 55 feet almost all other variations of blaze orange is barely visible but the full blaze orange jacket and cap can still be seen.

And also, if you have a companion in hunting but you don’t have enough blaze orange apparel, it’s really hard to tell whether there’s one or two of you at a long distance just using the binoculars. Nevertheless, it’s still okay to wear jackets or vests that has a camo pattern if there are less trees or bushes in the area. It is important to keep in mind that the deer aren’t totally color blind and can still see you. Adapting to the environment is a skill most common in great hunters and choosing the right clothes for the right terrain is extremely helpful when hunting.

Azure on the other hand, which is the complementary color of the blaze orange is very clear to the deer. When hunting for deer, it is best not to wear your favorite blue jeans. It may not be a safety issue but you don’t want your game running away from you just because they noticed movement from your brightly colored jeans!

There are some myths of deer being able to differentiate the environment from people through the brightly colored orange vest that you wear but no proof has ever come to surface. Some of these may actually have some truth in them and they come with a logical reason but safety should definitely come first. Like the saying says, it’s better to be safe than sorry. All in all, a deer’s eyesight isn’t the same as humans. They are able to see shorter wavelengths down to the ultraviolet light, but not bright red and orange. This is the reason why hunters wear blaze orange for safety purposes when hunting. It appears brown or gray to the deer but is very bright and clear to the human eye. Not only does blaze orange help other hunters distinguish game from humans, but it can also be helpful when being rescued.

[Watch This] Your Comprehensive Guide To A Hunting Survival Kit